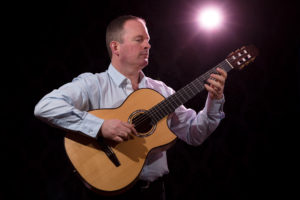 Geoff Robb is the founder of Find a Performer Ltd and was born into a musical family. His father Tim Robb is a conductor and violinist and his mother June Robb was a flautist and he grew up with string quartets and wind ensembles rehearsing downstairs!

He began performing as a street musician in his late teens and early twenties while travelling throughout Europe.
Since then he has played at several hundred weddings, concerts, parties and events across the UK and Ireland and performs on a guitar he made himself with the expert help of luthiers Richard Osborne and Cameron Mobbs.

He studied classical guitarist with Paul Gregory (winner of the International Segovia Prize), and has had tuition from many of the top classical guitarists and has a diploma in jazz. He has performed Vivaldi’s ‘Concerto for Lute in D’ (on the guitar) with The Bath Concertina Orchestra but works mostly as a soloist, playing recitals at arts festivals and guitar festivals across the UK and can often be seen as the ‘warm-up act’ for many international touring guitarists as they pass through Sussex.

“Geoff Robb – an outstanding guitarist. Every song he played was impeccable and his innovative technique was of the highest standard.” The Argus

He is also passionate about writing music – his compositions blend his classical training and interest in healing and meditation with his love of Celtic and Spanish music.